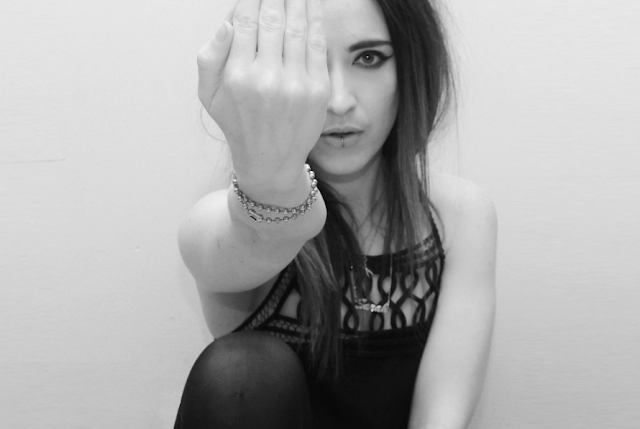 In this weeks installment of the "Wild Child Files" Interview series, we have the lovely Sarah O' Neill answering our quick-fire questions,  someone who I have been meaning to feature on this blog for a long time!

Sarah is probably best known as designer of the amazing bespoke womenswear label "Harlow&Harvey", (I've had the pleasure of wearing her beautiful designs a few times before!) but more recently however, she is extending her creative abilities towards Irelands ever-expanding music scene, in the form of Djing, event organising and promoting. Sarah recently co-founded "NOTYOURGIRLFRIEND", which is a collective of sorts, and a mish-mash of music, live gigs, visual art, and lots of other fun things. Sarah is living proof that with enough determination (and cups of coffee) it is indeed possible for us gals to pursue and fulfill any creative desire we may have. So! Let's get to the questions....

FAVOURITE FOOD/MEAL: Im a pretty crap cook, but if it comes out of my kitchen it will be vegetarian, red and spicy. I can only really make one thing and its called (rather creatively) - 'The Thing'. Sounds delicious, I know.

FAVORITE PERK OF MY JOB: I love that creativity is at the core of everything I do. Between fashion, DJing & Promoting - I could end up doing a million and one things on any given day, thats pretty sweet.

FRIENDS TELL ME I'M: 'Serene' - No really, someone said that to me once - I nearly died. I'm the furthest thing from serene you'll ever meet. My mates tell me I'll brave, passionate and adaptable. Thats true, I think.

MY PROUDEST MOMENT TO DATE: I've made a few really f*****g hard decisions and moves in the last few years, and I'm pretty proud of the fact i did. I think one of the bravest things you can do it to change your life completely by following your gut, instead of your head.

LAST DREAM I HAD: They're really weird these days - vivid, but I lose them so fast unless I write them down right away. In the last one, I was REALLY concerned that someone was trying to screw me out of the 'better' half of the cutlery I had stolen (I collect cutlery) - I woke up real stressed out about it. Random.

MY GUILTY PLEASURE: Sundays. Ones where the outside world doesn't exist, and nothing can get to you. A four year fashion degree gives you an almighty guilt complex about ever taking time off from work, so those days where I can pretend there is nothing on the to-do lists are incredible.

MY BIGGEST FASHION MISTAKE: I'm almost positive I owned a see through backpack when I was like 12. I find that pretty hard to fathom, seeing as I was probably only able to transport well-chosen 'props' around in the thing. What do 12 yr olds carry around anyways?

CURRENTLY LUSTING AFTER: Hahahaha, wouldn't give anyone the satisfaction of naming names ;) PET PEEVE: I seriously cannot BEAR negativity. Or messiness. Or lateness. Or people who don't return emails. ALSO, people who think the liking of cats AND dogs are mutually exclusive. But I'm very easygoing, really. ;)

BIGGEST SPLURGE/SPEND: Recently ? Laser Eye Surgery. It was SO worth it, I should be in a commercial I rant about it so much, but seriously, €2000 for EYESIGHT. That's INCREDIBLE.

DREAM HOLIDAY/TRIP: Berlin. Making that happen A.S.A.P. Really want to get back to Canada soon too ( I grew up there ), via San Francisco though. Anywhere warm would be good, rainy winters make me sad.

WHERE I'LL BE IN 5 YEARS TIME: Happily, not a notion.

HOW I WIND DOWN: There's this amazing website called the 'Thought Catalog'  - which is essentially a constantly updated collection of essays about anything and everything - mostly life and its constantly ridiculous and bizarre situations. I can get lost for hours in that.

MY MANTRA/SECRET TO SUCCESS: Never be satisfied. Never be complacent. Its never enough.

IF I WAS AN ANIMAL I'D BE: My cat Gizmo. Or a Giraffe - my mate Yoesph reckons 'if you're taller, you're more successful' - so I reckon they probably do OK. ;)

MY CELEBRITY CRUSH (DEAD OR ALIVE!) : I don't really do the whole celebrity crush thing to be honest, maybe Jennifer Connelly in an I-want-to-be-you kinda way. I am a sucker for blue eyes though.

MY CURRENT DREAM/GOAL: I always have about a million things I want accomplish at any given moment…

ADVICE TO MY 16 YEAR-OLD SELF: Be nicer to your parents. They're amazing, and they'll always have your back. WHO/WHAT INSPIRES ME : My friends. They're generally unruly, creative whirlwinds with unending ambition. People for whom enough is NEVER enough. Thats me too.

To keep up with Sarah's adventures (she has many!) you can check out her Radio show, Folie Á Deux, her clothing line "Harlow & Harvey" and her Clubnight/Music Collective, NOTYOURGIRLFRIEND. She's also very friendly, so be sure to drop her a line if you have any questions.
Hope you enjoyed this weeks installment of "WildChild Files" and be sure to tune in the following week to see which go-getter will be answering out questions next!
xx
WildChild